Happy New Year. This time of the year brings out market prognostications from every source and right now many seem very negative. Rather than add to this folly I believe it’s more useful to try to make sense of the recent uncertainties. I love the “it’s only a flesh wound” scene (click to watch) in ‘Monty Python and the Holy Grail’. The fearsome Black Knight seems intimidating and an imposing foe. Arthur, King of the Brittains, acknowledges the Black Knight’s revered legend of battle success. Despite Arthur’s offerings, the Black Knight won’t budge repeating “None shall Pass!” A battle that is expected to be competitive ensues. Even though the Knight quickly loses both of his arms he is undeterred form his effort and continues to try harass Arthur eventually losing both of his legs too. The Knight is still taunting Arthur as he “gallops” by.

Whether you are a Monty Python fan or not the humor of that scene seems to be playing out right in front of us by Saudi Arabia. Despite the numerous reports of how much low oil prices are devouring Saudi national surplus, despite being forced to curb some of their social welfare programs, and US Shale drillers continue to become more efficient – “tis but a scratch”, Saudi Arabia maintains their “none shall pass” mentality with oil production. Sure the Saudi reserves are vast and maybe they can weather the low oil prices for a long time but recent news seems the situation is worse than thought. Saudi Arabia announced a possible stock offering of ARAMCO – “It’s just a flesh wound.”

If you had a golden goose that repeatedly made money for you and you own 100% of the goose, don’t have to disclose any details of its health, its diet, how big it is or where you keep it; why would you give up your privacy let alone any piece of ownership of it? According to Forbes, “The petroleum sector accounts for roughly 80% of budget revenues, 45% of GDP, and 90% of export earnings of Saudi Arabia. Finding out the amount of actual Saudi oil reserves is like trying to find out how much gold is really in Ft. Knox. So the fact that the Saudi’s are willing to give up a piece of ARAMCO (Saudi state owned oil company formerly known as Arabian American Oil Co) indicates to me that they are desperate for a cash infusion. As I wrote in my June 1 Market Update (‘Duck’s Legs Are Key Indicator’): “Do not be fooled by reports that OPEC production is going to flood the market all of a sudden. This is a whole other essay unto itself but suffice it to say that many member have been in decline for years and those that currently aren’t (e.g. Saudi Arabia) have been re-working old fields with new technology since 2010 with no new discoveries. Prior to 2010 Saudi production was declining around 8% annually and since 2010 re-working old fields has helped but current levels are almost flat with where they were in 2011 – one year after the re-work program began. The key to today’s global oil supply is US production.” Do not buy the fear that some are selling. Plus lower oil prices remain a positive for many US consumers.

Likewise you had to be on a remote island to not hear headlines about China’s stock market panics recently. I’ve been writing for years that the Chinese economy seems to be slowing more than China is reporting – this is not new news. Numerous coverage has been given to how China’s economy is morphing from a manufacturing economy to a service economy. So while the Chinese economy goes through the gyrations as it changes, I am encouraged by reports of continued growth in the Chinese services. You may ask why do the severe swings in China’s stock market impact our stock market so much when the US exports to China are only 0.8% of US GDP. As Professor Jeremy Siegel from the Wharton School of Business said earlier in the week “The result is the lower yuan is going to export more deflation into the developed world.”Since we do import exponentially more form China than we export to them, a lower yuan would make it cheaper for US citizens to buy Chinese goods – a positive for the consumer.

US Housing continues its positive momentum and according to a Washington Post article this week, “trends seem firmly in place for the coming year.” Again another positive for the consumer. And it seems we hear about a new amazing innovation almost daily. This week’s stock market decline inspired headlines that were almost verbatim with the August 2011 ‘taper tantrum’ sell off but the much ballyhooed recent sell off is not even in the top 4 since March 2009 as shown in the chart below from Prof. Doug Short 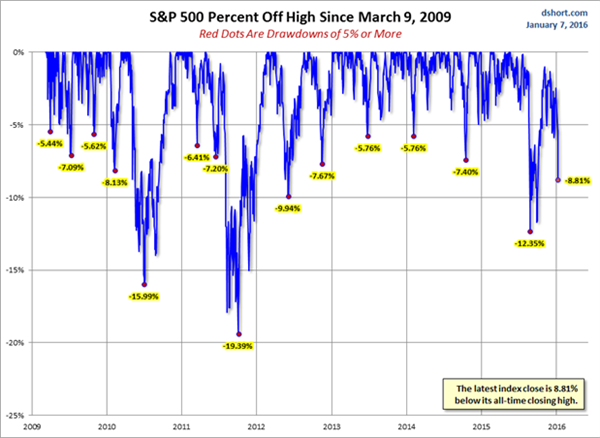 These are all topics that are being discussed widely throughout the media. A less discussed topic in the US media is the return of US jobs from overseas (on shoring) -which I’ve discussed in past Market Updates – that began a few years ago has gone form a few examples to a trickle. While on shoring is not bursting at the seams I expect it to grow considerably more as employers disenchantment abroad rises due to higher energy costs, market upheavals, social unrest, and other variables that are not necessarily pro-business.

I started out comparing Monty Python’s Black Knight to the current Saudi Arabian ‘game of chicken’ with low oil prices but with doom and gloom repeatedly popping up despite evidence to the contrary maybe it is pessimism that is acting out the part of the Black Knight in regards to the US consumer which is the largest customer to the world… Lower Oil prices and cheaper Chinese exports elicit cries from pessimism “Tis but a scratch”; housing market improvement is met with pessimism saying “It’s only a flesh wound.” I can see pessimism still trying to make its case as innovation expands and on shoring increases. I’ll end with another quote from Professor Jeremy Siegel’s same speech referenced above, “The negative sentiment we see now is getting way too bearish. Don’t forget, we are not anywhere near the panic lows we were at in August(2015)… The Market always overreacts.”

As your advisor we work for you and we’ll continue to help you sort through the turbulent markets. I invite you to call us at your convenience should you have any questions or need more information especially if we have not communicated recently. Remember to visit www.IntegrousInvesting.com for updates and educational articles as well as to access your brokerage and advisory accounts.

Opinions expressed are those of the author and are not endorsed by Summit Brokerage or Cetera Investment Advisers or their respective affiliates. All information herein has been prepared solely for informational purposes, and it is not an offer to buy, sell, or a solicitation of an offer to buy or sell any security or instrument to participate in any particular trading strategy. The information in this article is not intended as tax or legal advice, and it may not be relied on for the purpose of avoiding any federal tax penalties. You are encouraged to see tax or legal advice from an independent professional advisor.

Certain statements contained within are forward-looking statements including, but not limited to, statements that ae predictions of future events, trends, plans or objectives. Undue reliance should not be placed on such statements because, by their nature, they are subject to known and unknown risks and uncertainties. The Standard & Poor’s 500 (S&P 500) is an unmanaged group of securities considered to be representative of the stock market in general. It is not possible to invest directly in an index.